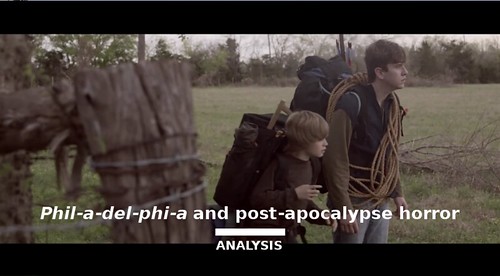 The true horror of post-apocalypse fiction is not the zombie trying to eat your brains, the deadly disease rotting your flesh, or the thundering tsunami coming right at you. The true horror is this: We lost. We, the people of Earth, had a pretty good run while it lasted but now that's all over. The true horror is the remaining shreds of humanity realizing that, in the very immediate future, everything they will have ever done will cease to matter because there will be nobody for it to matter to.

"Phil-a-del-phi-a" sets up this horror wonderfully by making its apocalypse as minimalist as possible; instead of lumbering monsters killing us all, people just… disappear. Making the apocalypse this abstract means there's no distraction from the oncoming doom of the human race. It's set up very efficiently, too, just a quick expository aside about how sound is the enemy. Which in turn sets up the explanation for why we're getting narration instead of dialogue; narration is often a hackneyed storytelling crutch, a clear violation of "show, don't tell", but here it's downright necessary. And even then it subverts our notion of how narration is supposed to work, breaking off in the middle of a sentence as the pencil breaks in our protagonist's hand.

This rupture carries over to the next and most potent scene. Before the pencil is broken the camera lingers for a while over every shot, but shortly thereafter it starts picking up the pace, cutting quicker and quicker and quicker until the final cut takes down the older boy… and then everything slows down again so we can see the protagonist's reaction. The genius here - and it may be due to budgetary reasons, but I'd like to hope it was intentional - is that we never see the brother getting "taken", because there's nothing that could be shown that is more terrifying that what we see reflected in our protagonist's eyes. Depriving us of seeing the method of his demise, whether he was taken violently or he simply vanished, means that we focus instead on what his loss means.

The final shot is heartbreaking, not just for the fact that they establish that the boy grew up and grew old without ever seeing his loved ones return, but rather for the fact that his voiceover is still that of a young boy - he hasn't spoken in all the countless decades he's spent waiting, so his internal monologue still sounds like the last voice he remembers speaking in. A lifetime trapped in silence by fear, totally alone. That's what true horror is.