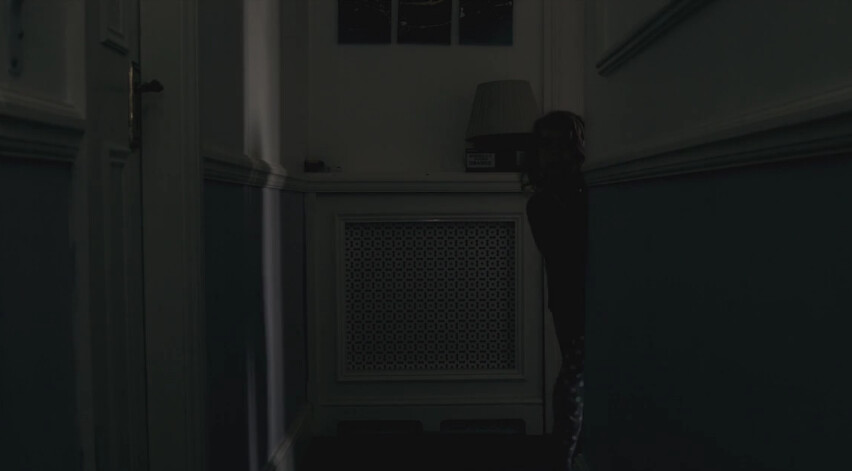 I Heard It Too and adapting micro-horror prose

I Heard It Too is based on a Reddit thread collecting "two-sentence horror stories"; it's the second short film I've seen adapted from that thread, with the first being the excellent Tuck Me In.


I Heard It Too's base story is as follows: "A girl heard her mom yell her name from downstairs, so she got up and started to head down. As she got to the stairs, her mom pulled her into her room and said 'I heard that, too.'"  Unlike Tuck Me In, the film's story doesn't end at the conclusion of the second sentence; rather, it uses the story as a setup for the rest of its runtime, with mixed results.  The decision to expand the story is not at all a bad one, but it becomes problematic when the film almost immediately fumbles one of the creepiest parts of the original - not knowing which "mom" is the real one.  Instead, it quickly establishes that the one who grabs the girl is the real mom and the one calling from downstairs is a fake, which removes all of the ambiguity and sets up the scene for a more conventional "hiding from the scary monster" short.  Furthermore, the idea of a vocal mimic monster is one that hasn't been explored much (in contrast to a complete mimic, like in The Thing or Terminator 2); in fact, with the exception of Fewdiodotcom's wonderful Baby Sounds I can't think of another horror film that uses that particular conceit.  And yet I Heard It Too doesn't really engage with the scariest part of this idea - not knowing whether the person you're talking to is actually who you think they are - opting rather to make it obvious that the monster is faking the mom's voice.  The concept of a vocal mimic suggests any of a number of creepy scenarios they could have gone with, like the monster switching to the daughter's voice to confuse the mother or the girl getting separated from her mother and having to guess which voice to follow, but instead we get the most straightforward version possible.


That's not to say that this short is without merit; it wouldn't be on here if I didn't think it was worth watching.  The "slowly approaching the open door" scene is a masterclass in building tension, the fact that the daughter plays hide-and-seek when she gets nervous is a great little horror touch, and the monster design is surprisingly creepy (I was surprised in that I assumed it was just going to be a fuzzily-shot actress in a torn white dress and was very happy to be proven wrong).  And no matter what else you have to say about it, the idea of a monster calling out to you in your mother's voice is a goddamn terrifying thing indeed.  I suspect that had I remained unaware of the story this short was based on I would have probably enjoyed it much more; it's a gripping short that keeps you in suspense the whole time and has excellent sound design to boot.  That said, it does appear that the filmmakers went for more visceral terror instead of the kind of creeping dread that makes horror fiction really stick with you.