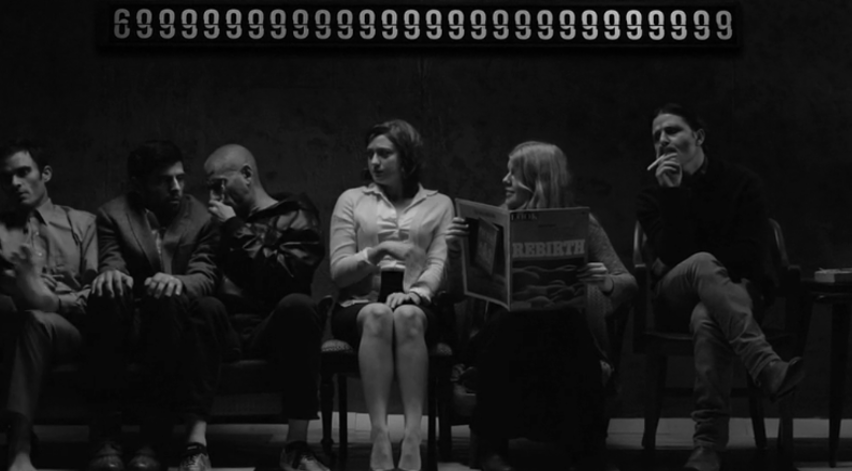 "Impossible space" in horror fiction refers to the idea of a geometry that defies reality.  This is a difficult concept to explain in writing, so some examples are in order: To start with, in Stanley Kubrick's The Shining, the Overlook Hotel contains rooms that could not possibly exist, windows which overlook scenery which should not be visible from their locations, and hallways that occasionally lead to different destinations.  Videogames also use impossible space to great effect; in games like Silent Hill and Antichamber it's not unusual to turn around to find the room you are in has reconfigured itself while you weren't looking, or to enter and exit the same door only to find yourself someplace completely new.  That "while you weren't looking" part is an integral component of impossible space - if you saw, say, a monster moving all the furniture around or you could tell the room you were in was moving to a new location it would still be confusing and creepy but at least you would know what was going on.  Impossible space, in contrast, is all about making you doubt either your sanity or the very truth of reality.

Of course, due to its reality-bending nature, impossible space pretty much only crops up in horror of the most fiendishly supernatural variety.  Which brings us in turn to Exit Interview, a wonderfully twisted short about a young woman's arrival in… Hell?  Purgatory?  Heaven?  Gosh, I hope it isn't Heaven.  Anyway, the short starts off almost immediately by changing the location without warning as the woman presumably dies and is transported without moving into the Waiting Room of the Damned.  After looking up to find out she's number 7,000,000,000,000,000,000,000,000,000 and then down to a malevolent piece of paper, she looks back up again to find men staring at her where no men were before.  As she starts back we see she's now sitting in a more ornate chair and staring at another chair, which is empty until another character (referred to in the credits as "The Handler") pops into existence in front of her, which does somewhat violate impossible space but there's no time to process that because now she's suddenly sitting on the floor with a dead baby (her dead baby, presumably) in her arms.  Up till now the woman ("Emma" in the credits) has been functioning as an audience surrogate, reacting with the same confusion to her surroundings as we might, but this all changes when she obeys the Handler's badgering and starts feasting on the dead child.  This onslaught of nightmare-logic presages what's about to happen: The Handler does a little dance.  I don't have much to say about this dance other than I found it wonderful.  Here's a gif:

Delightful.  The next time impossible space rears up again is when the Handler sits down and the camera pans around to show that the long, checkerboard-patterned hallway he boogied down has somehow been compressed and he's now face-to-face with Emma.  Their conversation is a back-and-forth between gurgling fish noises and inarticulate whisper-screams; I really wish I knew how to lipread so I could understand what they were actually saying, but obviously the point here is for the audience to be completely in the dark despite the fact that Emma and the Handler clearly understand one another.  The interview concluded, impossible space is unleashed one last time in a triple dose, as when the Handler gets up he's somehow facing away from Emma, she's back in the waiting room, and also everyone else is now Emma.  As the counter increments again, it's implied that you, the viewer, are the next interviewee - because if everyone is Emma, and she's already done her interview, then you're the only person left.


The overall effect of Exit Interview is a feeling like a fever dream; a continuous disorientation, with no constants to grab onto and no assumptions left unchallenged.  It's horror without jump scares, which is always appreciated, and it's a horror short that uses disturbing imagery without relying solely on shock value to make itself felt.  It sustains its creepiness by assaulting our sense of reality.