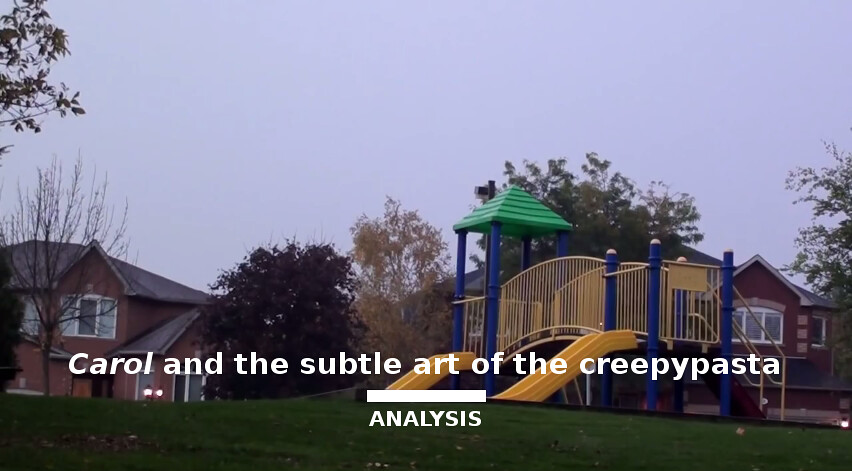 WARNING: This article is an analysis of the embedded video, and accordingly contains spoilers. Watch the video before reading on.

About half a decade ago, creepypastas starting getting popular. For the uninitiated, a "creepypasta" is a short horror story posted online, usually with the caveat that "this really happened", a supposedly-forgotten chunk of internet arcana with terrifying undertones. While there were, of course, a lot of terribly-written stories, there were some standouts, including Kris Straub's excellent "Candle Cove" - which may in fact be the most famous epistolary narrative of the 21st century. Shortly thereafter, creepypasta readers started showing up on Youtube and of these TheLittleFears, the creator of the above video, stood out immediately. She had discerning taste as a curator, only picking the stories that were actually scary; she actually put effort into pairing off-putting visuals with the stories, as opposed to just putting up a static image of a spooky face as many of her counterparts did; and her even, lightly-Canadian-accented voice was a wonderfully dissonant counterpart to the tales of grim terror she was spinning.

Over three years ago, she suddenly went silent after posting videos on a fairly-regular basis. I assumed she had stopped making videos for whatever reason and moved on, but upon randomly checking her channel a few months ago I realized that almost exactly a year ago she had made three more videos. I was excited to see the new batch, but after watching them I couldn't shake the feeling that they seemed… different, somehow. Off. Not quite the same as the others. And after doing some research, I realized that these weren't creepypastas at all.

One of the three new videos, "Belle Plains, 1965", is based almost verbatim from an old New York Times article about the mysterious disappearance of Pauline Picard - although TheLittleFears changed the names, dates, and locations for no reason I can see. The other two I can find no record of online; they appear to be original. She had gone from a horror transcriber to a horror creator.

Shortly thereafter she closed all comments on all her videos… except for the newest three. She hasn't uploaded another video since.

I don't even know her name.

"Carol" is one of the three new videos. It's the one that has stuck with me for the longest time, although the other ones aren't half bad either. It would probably not have done this - indeed, I probably would have found it hilarious, ridiculous nonsense - except for the final image. It's unsettling on its own, made more unsettling by the narrative preceding it, and yet the masterstroke is the presentation. Familiarity breeds contempt, so she only shows the picture for a few seconds; not enough time to get the details fully set in your head, but plenty of time to get an outline for your brain to sketch in the details on its own. And then a few seconds of blackness, so you can really think about the implications of that… thing… having agency. It would fall flat if we actually saw it in motion - there's a reason Chucky isn't held up as a shining pinnacle of horror filmmaking - but with the right editing the true horror happens in the best place, inside your own head.